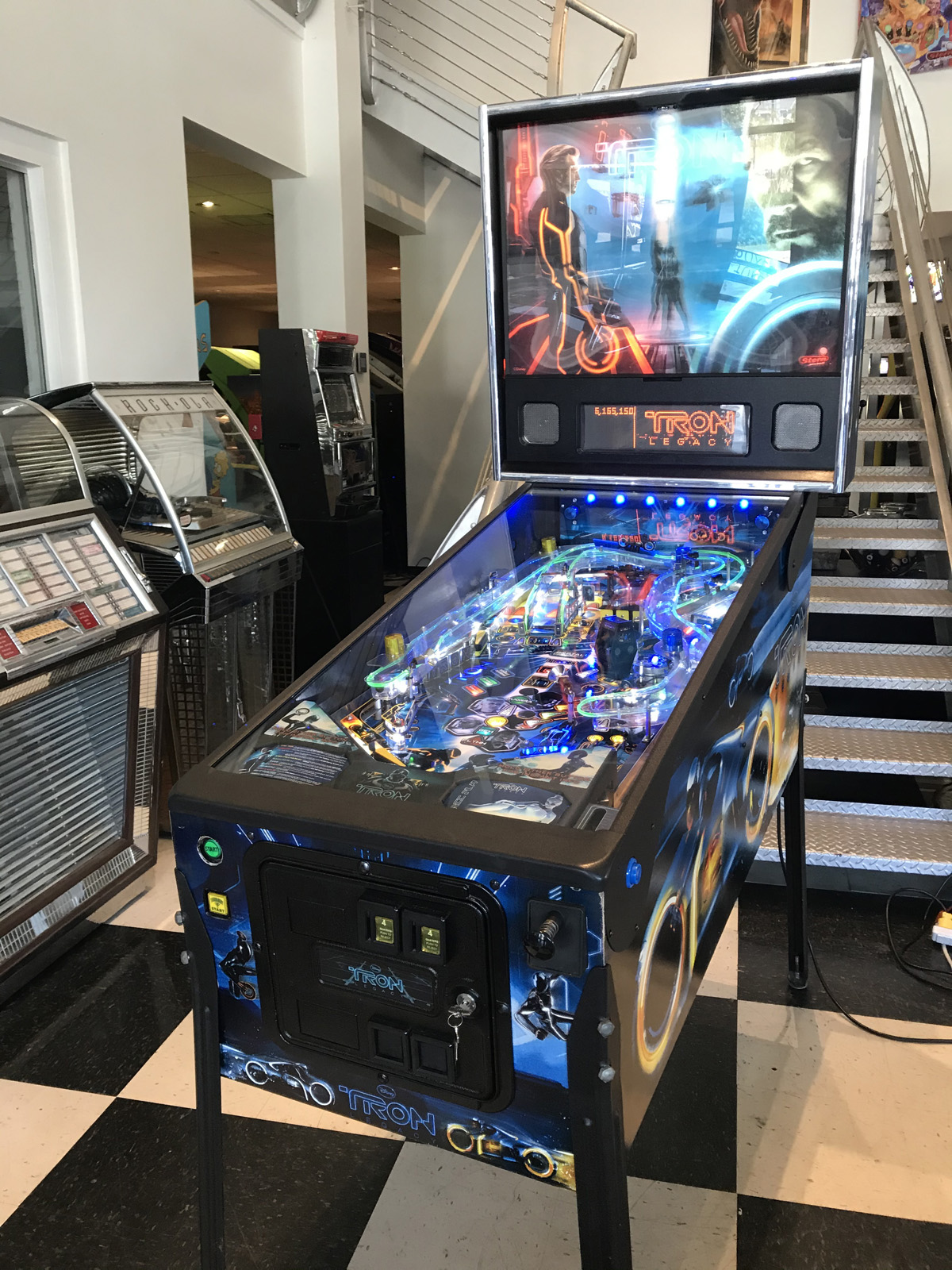 In TRON: Legacy Pinball, players battle as Sam Flynn on the Grid against Clu and Rinzler. Players will enjoy multi-ball rounds themed around scenes from the film: ride the two ramps for Light Cycle battles on different levels of the Grid; defeat the motorized Recognizer target bank to expose Rinzler’s spinning Identity Disc; or fire the ball from Rinzler’s Disc to simulate a Disc War. There are numerous play features for characters in the film, including Kevin Flynn, Gem, Zuse, Quorra and Clu. Play all features to escape the Grid through the Portal. TRON: Legacy is considered by many pinball enthusiasts and collectors as one of the best pinball machines, Stern has ever designed due to it’s energetic sound package, art package and very challenging rule set…..Can you get to the Portal? Good luck program.

This TRON: Legacy Pro Model pinball machine was recently taken in on trade. It has been operated commercially but it has been well maintained while out on location. Since coming into our possession we have thoroughly shopped out this game. By that we mean that all components have been taken off the top side of the playing field. All ramps, plastics and posts have been cleaned and the entire playing surface of the playfield has been cleaned and polished. New rubber rings and ball were installed. This game has been upgraded to premium non-ghosting LED’s throughout the playfield which give it a great look and they’ll last much longer than incandescent light bulbs.

In addition this game has some of the most desirable modifications added to it valued at over $700! Including an illuminated/animated backbox kit, making it look like the Portal light is pulsing as well as lighting flashes on the games lenticular 3D backglass. This game also has the Eli Fiber Optic Kit added to the ramps.  This fiber optic kit adds color changing fiber tubes to each ramp that change color in correspondence to modes of play within the game, mimicking like that of the Limited Edition version of TRON: Legacy Pinball.  Last but not least this game also has the mini TRON Arcade Game mode above the scoop hole. This miniture arcade game looks like the classic 1982 Arcade Game and has a small LCD screen in it that looks the games attract mode screen. This is too cool, you’ve got to see it!

Our technician team has went through this game and tested and repaired anything that was necessary to make this game work as it should. As with all of our pre-owned electronic pinball machines, this game includes a 30 day warranty on the electronics as well as mechanical components.

This is the first TRON: Legacy Pinball Machine we’ve came into possession of in over 5 years! Hurry as we don’t expect this game to last very long in our showroom.