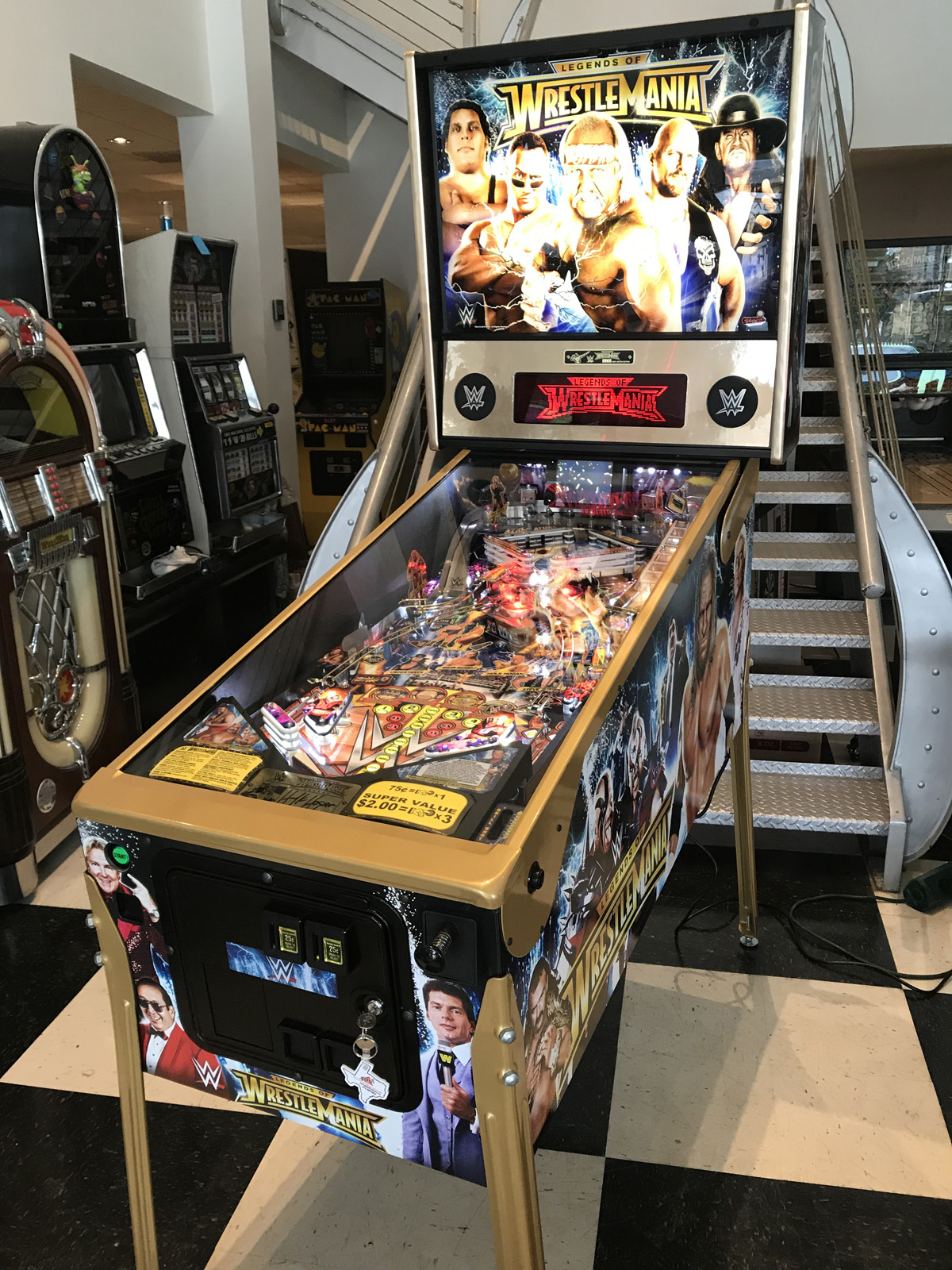 WWE Wrestlemania calls players into the ring as WWE superstars embarking on a quest to become the WWE worldwide heavyweight champion. Players train their wrestlers and then compete in a series of matches leading them on the road to Wrestlemania.

The Limited Edition machines feature an innovative upper pinball playfield wrestling ring. With the flipper buttons, players control two “Slammer” slingshot-style kickers in the ropes of the ring. Completing the three drop target bank starts a wrestling match. Players rack up points and pin opponents in the ring by shooting into a kick out hole. Keeping the ball in the ring and hitting as many targets as possible will advance players through the match. Multiple ramps guide the ball throughout gameplay, while brilliant lightshows highlight the all LED playfield. You choose the wrestler at the start of each game! Choose from John Cena, The Rock, “Stone Cold” Steve Austin, “The Heartbreak Kid” Shawn Michaels, The Undertaker, Daniel Bryan, Triple H and of course Hulk Hogan. Each Wrestler is introduced with their theme song as well as their Intro on the Mini-Trinitron. WWE announcers Jerry“The King” Lawlor and Michael Cole add play by play excitement.

Wrestling legend Hulk Hogan has individually autographed each of the numbered WWE Legends of Wrestlemania Limited Edition (LE) machines on a bottom arch mounted gold plaque. With only 400 autographs available, this collectible must be limited to that number of games. The LE game art features classic WWE stars, of course including Hulk Hogan. Actual WWE wrestling action is projected on the LE’s replica “Titantron” playfield level 5.7 inch LCD directly above the ring. The ball is always wild when it comes into contact with the LE’s exclusive “Chaos” spinning DISC while a third “Wham! Arm” flipper allows players to knock the ball off a wire ramp.

This pre-owned pinball machine is in remarkable condition and it is sure to please any die hard WWE fan. This WWE Legends of Wrestlemania is #103 of 400 produced. We have thoroughly shopped out the playfield, by removing everything from the top side of the playfield. The playing surface and all ramps and plastics have been cleaned and polished. All new rubber rings throughout the playfield as well as new steel balls. All components and under playfield inserts have been cleaned as well.

WWE Legends of Wrestlemania Limited Edition has been fully checked over by our technicians and it’s ready to be enjoyed in your home.

As with all of our pre-owned pinball machines, this machine includes our 30 day limited warranty on the electronics.