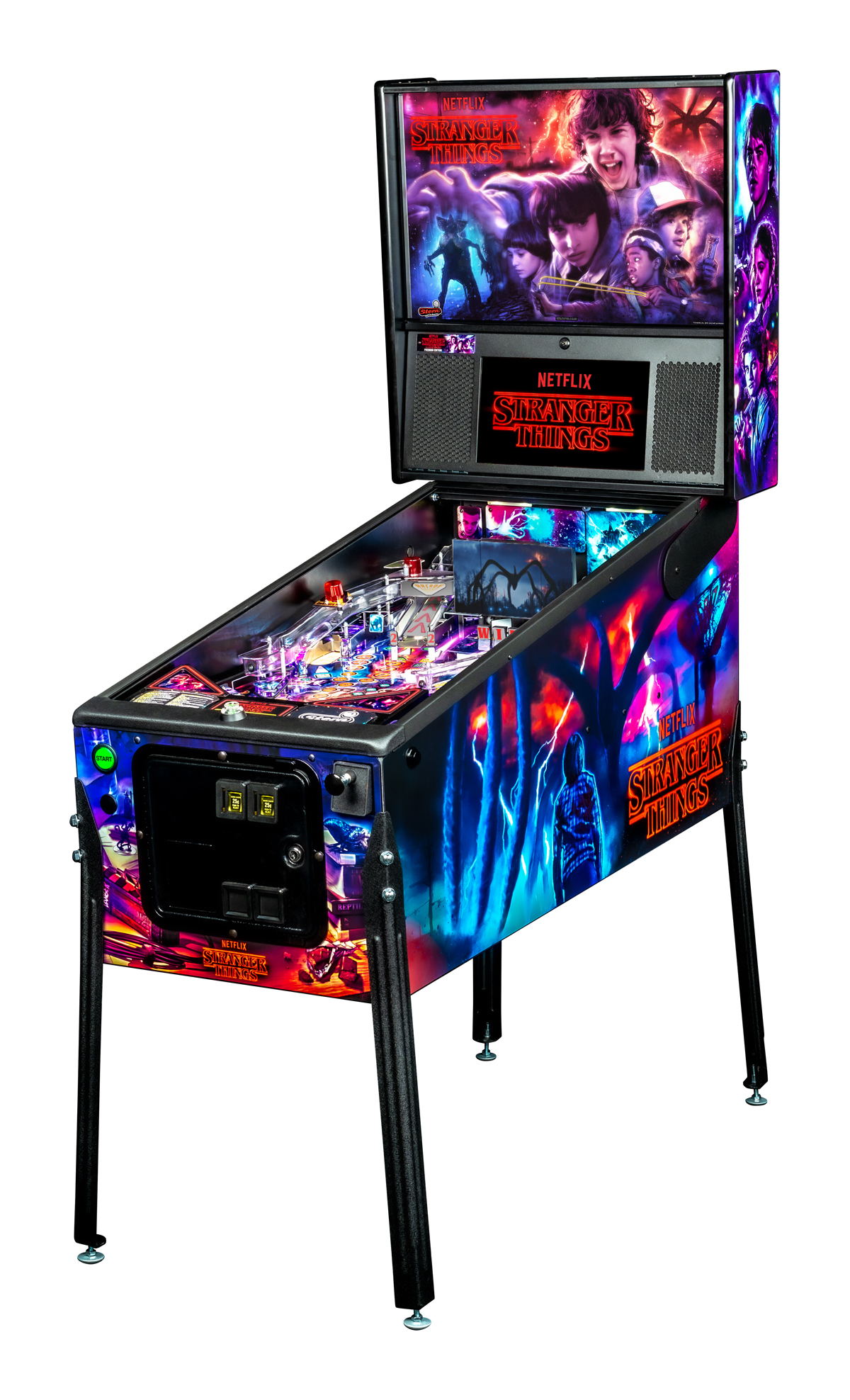 LAST ONE. Now out of production.
This is our last Stranger Things Premium we have in stock. This game is brand new and has the UV Kit already installed on it (a $350 value).
This one-of-a-kind UV lighting kit will turn your Stranger Things pinball playing experience upside down!  Custom interactive code will activate lighting during dramatic events and experiences throughout game play, immersing players into the Stranger Things universe. Unleash the specially printed art on the playfield and playfield plastics that can only be seen with the UV Kit installed on your game.

Experience the terrifying forces in Hawkins, Indiana that turn this small town “upside down” with supernatural elements, strange sightings, and government secrets. Stranger Things pinball machines will immerse players in a search to unravel the extraordinary mysteries and secret government experiments taking place at the Hawkins National Laboratory.

Pinball designer Brian Eddy brings Stranger Things to life in the silver ball world.  Brian is famous for his great games, Attack from Mars and Medieval Madness.  After a 20 year hiatus, while active in on-line video game design including President of a significant company, Brian relights his passion – pinball game design – with this great title.
When you play Stranger Things, you will agree Brian still has his pinball
design chops. The gameplay focuses on unlocking the hidden meanings of supernatural events occurring in and around the town, including the appearance of a girl known as “Eleven” with telekinetic abilities. The ball is wild as Mike, Lucas, Dustin, Will, Joyce, and Police Chief Jim Hopper help Eleven close the dimensional gate.

Stranger Things includes a 4 bank resettable memory drop target assembly in the sweet
spot middle of the playfield.  Spell WILL.  Spell RUN!  The big ramp behind
the target, lowers down to expose the Demogorgon bash toy.  Shoot in its mouth.

The Pro, Premium, and Limited Edition models all feature distinct hand-drawn art by Bob Stevlic in addition to the custom sculpted, interactive Demogorgon bash toy, guarded by drop targets and a rotating ramp. All models include two hideout ball scoops, a Demodog spinner, three custom ramps, and game rules that will transport players into the Upside Down.

The Premium and Limited Edition models feature a first ever video projector that displays
images and animations directly on the playfield, creating dramatic interactions with gameplay action. The center of the playfield features a unique ramp that doubles as a screen and leads the player into a direct battle with the Demogorgon. These models also feature a new Eleven themed “telekinetic” magnetic ball lock.