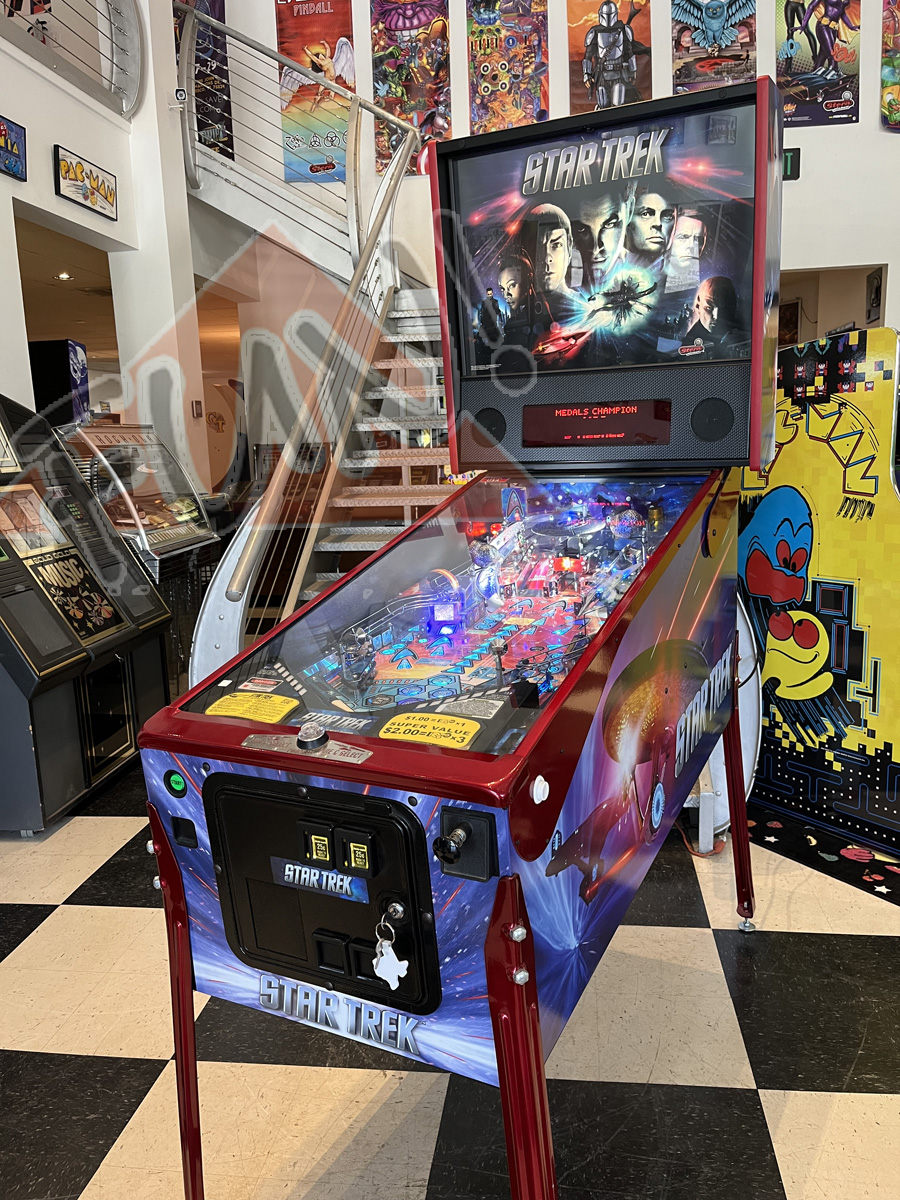 Great condition – Home Use Only

This pre-owned pinball machine is in excellent condition and was purchased back from its original owner where it has only been enjoyed in their private residence. This game has never been operated commercially in an arcade, restaurant or bar which goes to show for it’s amazing condition. Goodie bag is still stapled inside of the cabinet with the owners manual, promo plastics and key fobs, etc. The only flaw this game has is a few scratches in the powder coat on one of the legs….other than that this game is great!!!

Inspired by the Star Trek and Star Trek Into Darkness films, the newest Stern machine puts players in Captain James Kirk’s chair of the U.S.S. Enterprise, embarking on a journey to protect and defend the planets of the Federation.

Rated at #23 in the top 100 Pinball Machines ever made, Stern’s Star Trek pinball machine features all the bells and whistles a Star Trek fan would desire. With adrenalin-filled battles, high-definition artwork, cosmic LED lighting and classic musical scores, the Star Trek game will evoke the sensation of flying through space at Warp Speed to rescue Spock and defeat the U.S.S. Vengeance.  The newest game from Stern includes an animated battleship, three lightning fast ramps, three flippers, resettable memory drop targets and much more.

Star Trek is Stern’s first all-LED Pro Model. The playfield features seven multicolored LED paths that lead gamers on easy-to-understand color-coded routes. There are six missions for casual players matched by 18 complex treks to immerse enthusiast players deeper in the game. As players attack an oncoming threat with three action-centered flippers, the all-LED playfield will captivate onlookers and enhance the player experience with features like phaser flashes and photon torpedoes.

Players will instinctively know exactly what to do when they approach Star Trek pinball – destroy the U.S.S. Vengeance, a key action-packed feature on the playing field. From the very start, players will have the chance to unlock special opportunities, collect tantalizing bonus features and win a series of accolades called The Captain’s Chair. Star Trek aficionados can expect the classic battle between the heroic Enterprise team and the villainous Khan as well as run-ins with Nero, Klingons and the Narada.

In addition to all the features included on the Pro Model, the Premium includes full metal ramps, left outlane kickback, crimson red exterior trim powder coated rails, legs and lockbar…plus many other added features. Click the link below to see all of the differences between models.

Click here to see the differences between the Star Trek Pro & Premium Models.

– Shaker Motor – $150 (Installed)
Make your game rumble with a shaker motor!  These factory motors are programmed specifically to interact with player in certain modes of the game to make your game rumble and come to life! Adds a whole new level of game play.

WARRANTY:
This pre-owned pinball machine includes our 30 day warranty on labor including electronic and mechanical components.