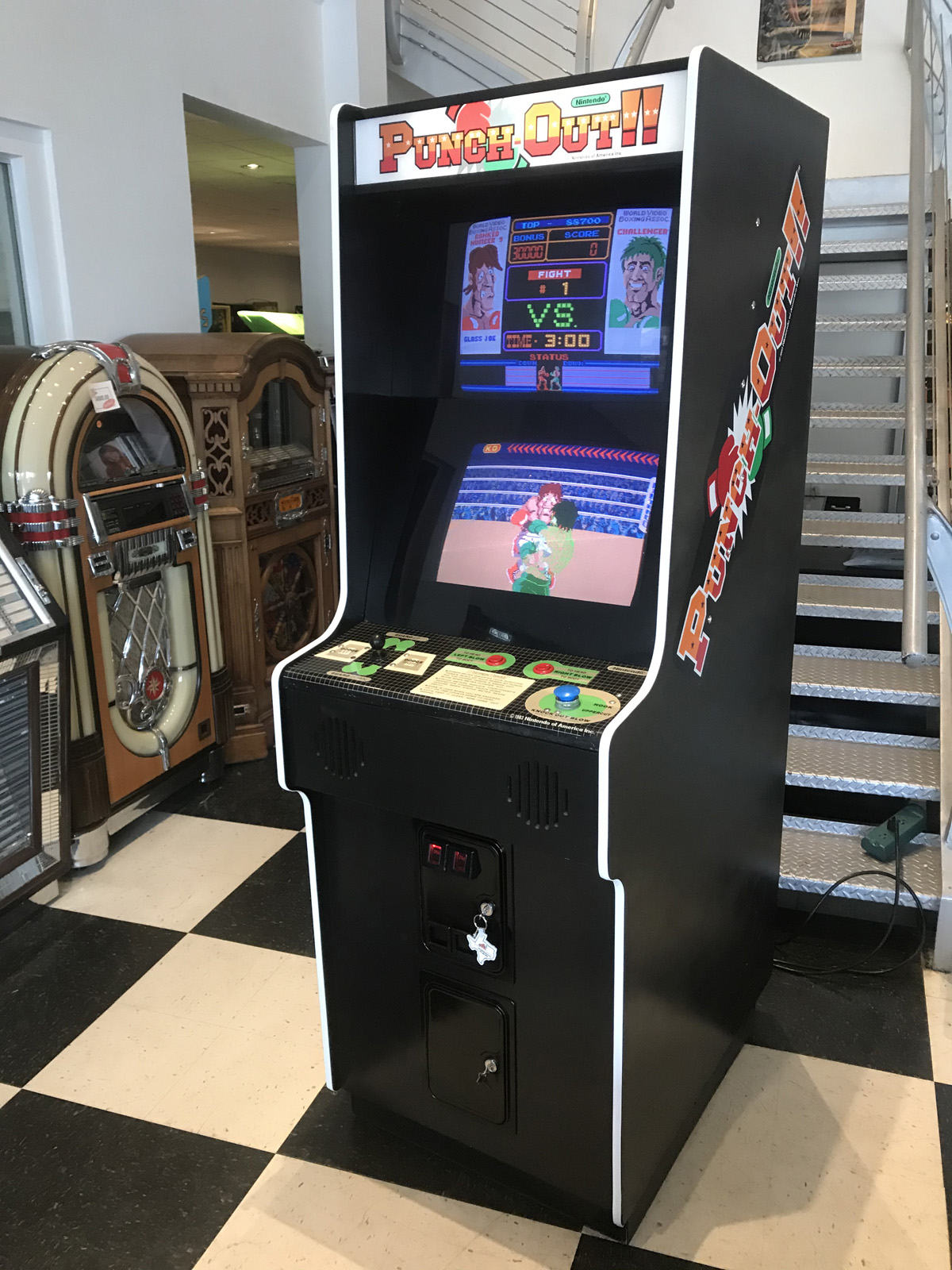 Punch-Out!! is a boxing arcade game by Nintendo, originally released in December 1983. It was the first in a series of successful Punch-Out!! games, producing an arcade sequel known as Super Punch-Out!!,  and a highly popular version for the NES known as Mike Tyson’s Punch-Out!!

The arcade game features two 19″ CRT monitors in the cabinet and was one of the first games to introduce synthesized speech.

Game Play –
In the game, the player assumes the role of a green-haired boxer, known by three initials the player chooses when the game begins. During matches, the player’s boxer is viewed from behind and above as a wireframe so the opponents can be seen. PUNCH-OUT!! introduced recurring video games opponent characters such as Glass Joe, Piston Hurricane, Bald Bull, and Mr. Sandman. The player must time his punches, dodges and blocks in order to defeat the opposing boxer. Hints are given as to the opponent’s next move by subtle eye changes (the whites of the eyes flash yellow), but the player must ultimately predict what moves the opponent will make and react appropriately.

Once the player defeats the last opponent, the opponents repeat with increased difficulty. The player has one 3-minute round to score a knockout and will automatically lose if time runs out. A fighter who is knocked down three times in one round will be unable to rise, leading to a knockout. In the event the player loses, the computer controlled victor will taunt the player and the corner man for the player will try to entice the player to play again (“Come on, stand up and fight!”) via the game’s distinctive digitized speech. Players are only allowed one continue per play through. Like many games made during the Golden Age of Arcade Games, there is no actual ending and the game continuously loops until the player loses.

Now 30+ years later, finding a nice original Punch-Out!! is difficult as many of these arcade games were converted to Nintendo Playchoice 10 Multigame Arcade Game. This original survivor game has went through an extensive restoration process by us and we feel the new owner will be ecstatic over this games condition.

Bottom line, this game looks outstanding and plays great! This is one of the true classic arcade games that has never been emulated to some type of classic multi-game platform. The only way to own/play the Arcade Game PUNCH-OUT!! it has to be the real deal.

PUNCH-OUT!! includes our 30 day warranty on the electronics. This is a rare opportunity to own a very sought after classic arcade game.