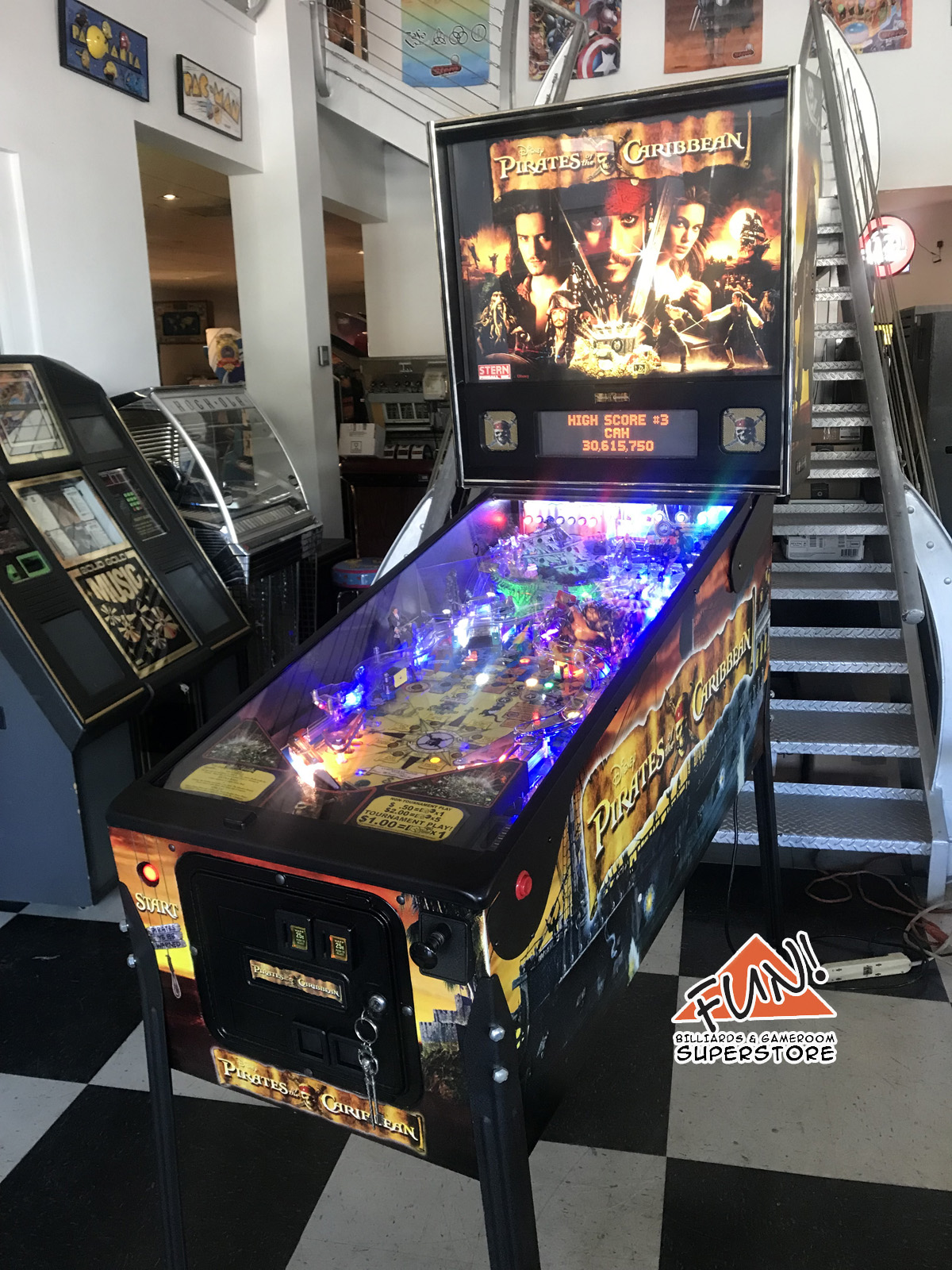 Pirates of the Caribbean Pinball Machine *

Pirates of the Caribbean offers the following features: A mechanical pirate ship that the player strikes with the pinball. With each hit, the ship lowers its sails and eventually sinks into the playfield, thus revealing a shot into the Kraken’s mouth. In this area, the player can sink the ship, destroy the Kraken, and fight Davy Jones.

A mechanical treasures chest, the Dead Man’s Chest, through which the player can shoot the ball. When the player has the KEY, the chest opens. They can then spell H-E-A-R-T to begin HEART multi-ball.
A contained spinning rubber disk where the player can capture up to three pinballs. The disk bounces them around in the contained area and holds them for an extended period of time till the player starts multi-ball. The disk sometimes represents Tortuga and other times Port Royal.
A map compass comprised of playfield inserts that shows the player each feature they need to finish. Complete all eight features and play Four Winds Multi-ball.

This pinball is Home Use Only, meaning that is it has never been in a bar, arcade or commercial establishment. Although it is not new, it looks and plays like it is as it has been well taken care of with very low plays. You would be hard pressed to find a much nicer looking example of this title.

This pin has been shopped with the playfield cleaned and waxed. All rubber rings have been replaced with new.  All lamps have been upgraded & replaced with premium non-ghosting CoinTaker LED’s.  The results look stunning. These LED’s last longer, look better and consume less energy than standard incandescent bulbs. All game functions have been checked by a trained technician.

In addition this game was customized with custom molded decorative figures added to the playfield for a nice eye appealing touch. The software on this game has been upgraded with custom audio featuring the original music score from the motion picture (which wasn’t originally included on this pinball, due to licensing).This new sound package on this game sounds amazing and adds a whole new level of excitement when playing this game.

– Shaker Motor – $100 ($150 installed)
Make your game rumble with a shaker motor!  These factory motors are programmed specifically to interact with player in certain modes of the game to make your game rumble and come to life! Adds a whole new level of game play.