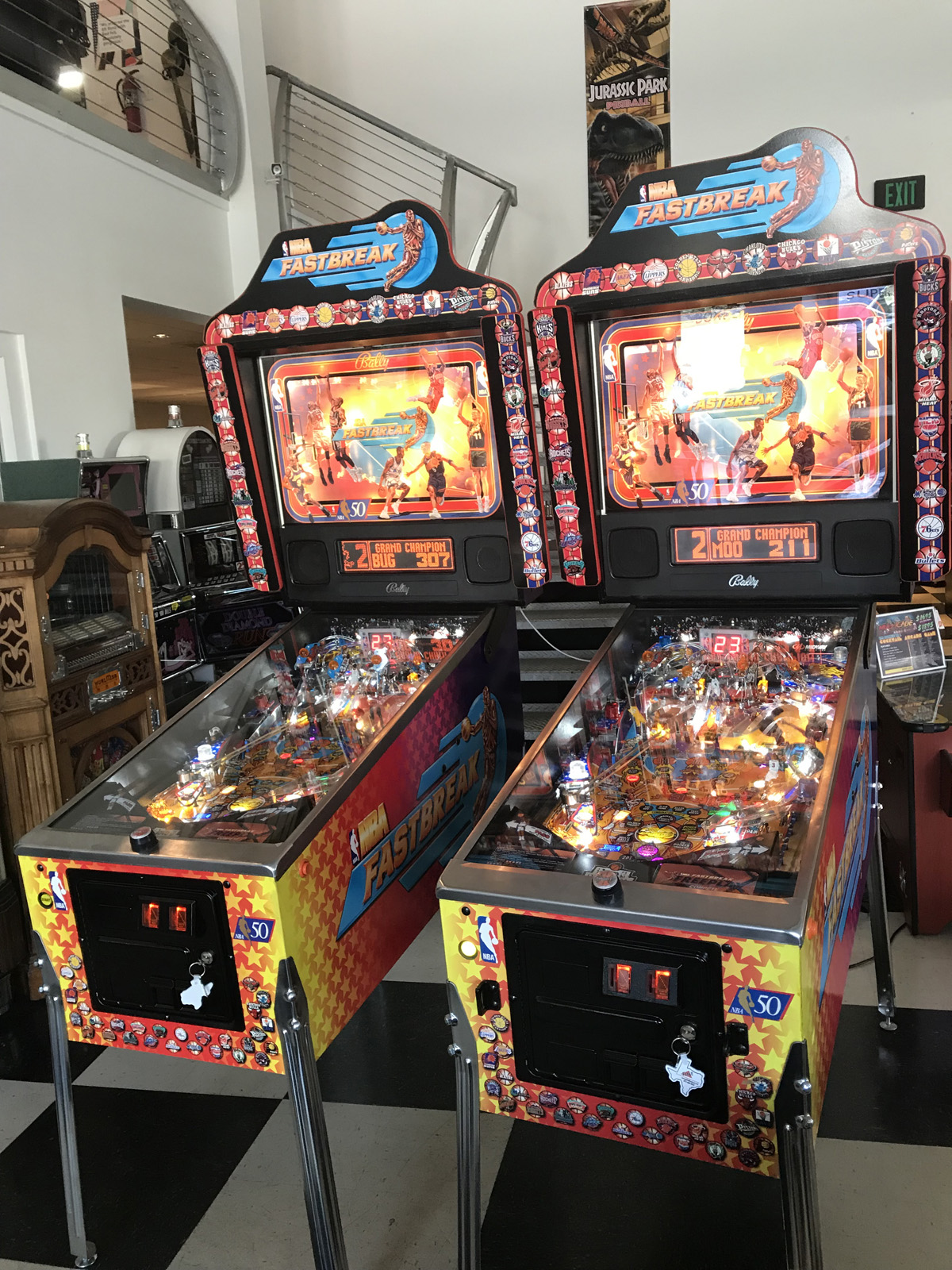 The hottest rookie of the year!

Pick your favorite NBA team and see if you can earn your initials on the Leader Board for having the best NBA record!

NBA Fastbreak pinball machine has scoring just like real basketball, shots are worth 2Pt, 3PT’s and Free Throw’s. That in itself is a major difference from other pinball machines. The objective of NBA Fastbreak is to get to Trophy Multiball by completing six tasks, win a championship ring, and score as many points as possible along the way.

Commentary by NBA play by play announcer Tim Kitzrow, Multiball, Up to 4 players can at a time (It’s more fun to compete!), 3 Pop Bumpers, Ramp(s), and mechanical backbox animation consisting of a flipper you control to shot baskets worth 1, 2 or 3 points.

NBA Fastbreak is the only pinball machine that was designed to where you could have two NBA Fastbreak Pinball’s linked together for competitive play.  Either play by yourself on either machine, or with a friend for head to head competitive action in a timed game on each machine. The listed price of $8995 is for both pinball machines. Traded into us by a local collector, both of these machines have been well taken care of. Both machines have the original (new old stock) often missing. factory backbox toppers listing all the NBA teams and baring the NBA Fastbreak logo. These original factory toppers are quite rare and these are the first one’s we have came across in many years.

Both of these machines have just undergone our thorough refurbishment process and they look and plays great! In addition, each machine has added to them a few small custom NBA Superstar figures mounted in various places above the playfield.

We have thoroughly shopped both of these games out, meaning that we have removed all components (ramps, plastics, posts, etc.) from the top side of the playfields and cleaned and polished the playing surfaces and all ramps and plastics. Brand new rubber rings installed and all #44/#555 lamps have been upgraded to premium non-ghosting LED’s. These LED’s look amazing and will last much longer than the original incandescent bulbs, plus they consume less energy.

Both machines have been fully checked out by our technician team and need nothing more besides a corner in your man cave where it will become the focal point of your room.

As with all of our pre-owned games, NBA Fastbreak includes a 30 day warranty on the electronics. This is truly rare opportunity to own both of these games together, linked and with toppers.