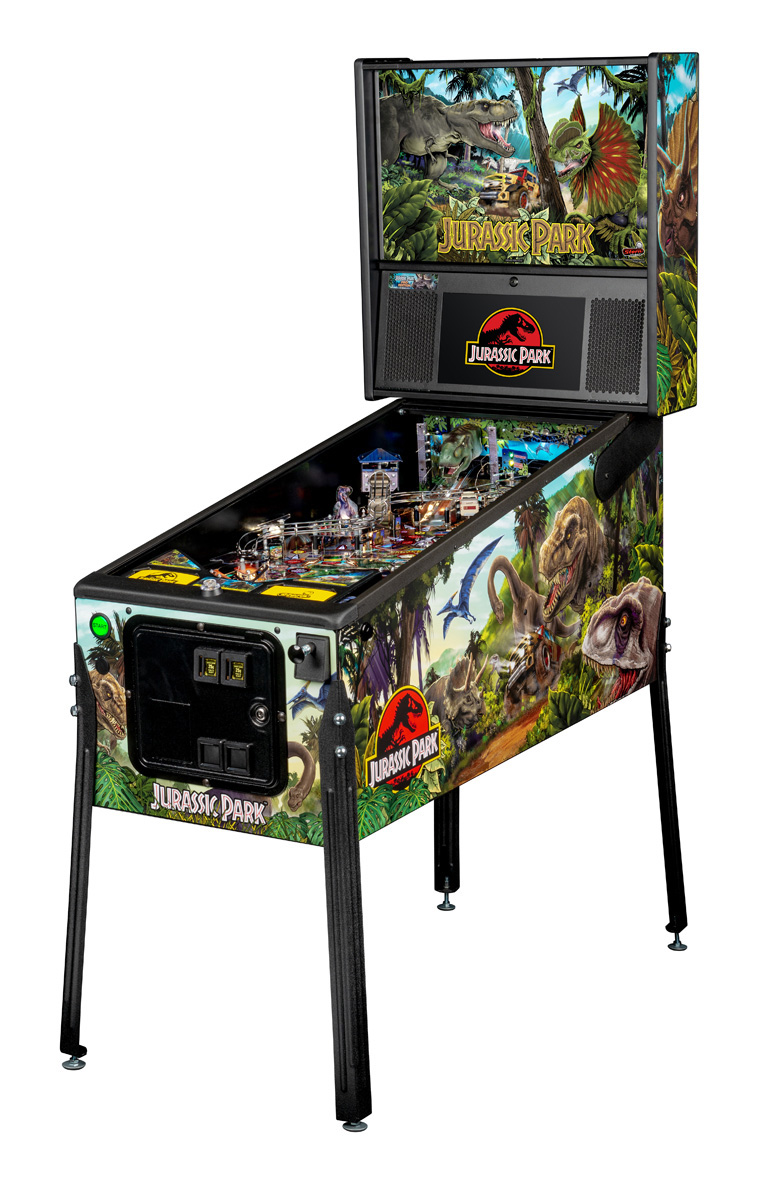 Pre-Order now for next build with a $500 Deposit

Jurassic Park includes Stern’s Insider Connected system, which includes a QR code reader on the bottom arch that enables players to interact with the game and this new network in a variety of ways. Stern Insider Connected provides new entertainment and player engagement features and an operator focused tool set to drive location play and remotely manage every aspect of the machines. Insider Connected will include a full scope of features scheduled for roll out over the next year.

Welcome to Jurassic Park! This topper interacts with your game by capturing dinosaurs to light a letter in Jurassic Park. Your letter progress carries over from game to game. Spell Jurassic Park for a special mode. There’s no better way to top off your game!

The topper has individual LEDs that light up the individual letters of JURASSIC PARK. As you start the game with the topper attached and not a Competition Mode game you will be able to light up a letter in JURASSIC PARK on the topper solid for each dinosaur you capture in the game. Each letter is collected from left to right in order until JURASSIC PARK is spelled out. This is persistent across all players and games, eventually someone will be the lucky / skilled person to get the dino that lights all the JURASSIC PARK letters. Once it’s ready to go, a Super Supply Drop lights at the Supply Drop Target to start the mode “GOAT MANIA”. If you wind up draining before starting GOAT MANIA the “K” in JURASSIC PARK will un-light for the next person to collect a dino to light it again after their next dino collect. Once GOAT MANIA is successfully started all the letters unlight after the mode is played and can start being collected again.

A limited flip mode default 40 flips, but adjustable by adjustment “GOAT MANIA FLIP LIMIT” min 35 / max 50. You have 40 flips to score as many shots as you can as each flip makes a goat sound effect and the scores are all based on the Amber shots in the game as if all the Amber Features are running at the same time. TARGETS, RAMPS, HALFPIPES, SLINGS, POPS all score the current Amber Value and increment it for each score.