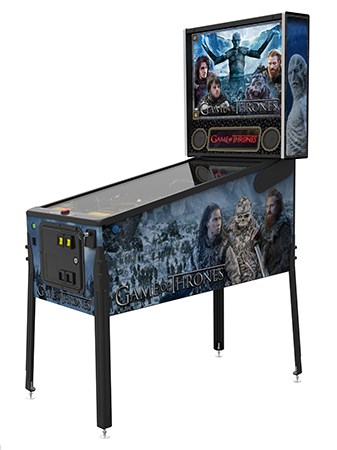 What’s the difference between the Pro, Premium & Limited Edition Models of Game of Thrones? Click here to see the Feature Matrix Chart.

Stern’s Game of Thrones Pro, Premium, and Limited Edition machines are packed with features and toys that provide an irresistible challenge to play against kings, knights, knaves and dragons. Each player can choose to be a Knight of the Stark, Lannister, Greyjoy, Baratheon, Martell, or Tyrell family Houses, and pick other Houses to battle. Game of Thrones actor Rory McCann as Sandor Clegane (The Hound) guides the player throughout the game with authenticity and strong presence. The goal of the game is to rule the seven kingdoms of Westeros.

The Game of Thrones pinball machine will be available in three models offering a variety of pricing and exclusivity for Game of Thrones fans and pinball collectors. All three models feature an animated, interactive dragon that roars, flies, and breathes fire through the magic of all-LED lit playfields. Players can slam the ball into the Battering Ram, attempting to break down the Castle Doors and grab features such as Super Jackpots, Wild Fire, and Playfield Score Multipliers. The animated mechanical Sword of Multiball holds back reinforcements until it’s time to attack. A bank of three Drop-Targets lights the Lord of Light Lanes to protect against side drains and awards other progressive features. A Kickback fires the ball in anger when struck.

Players can win valuable random awards and features with Reel PopsTM, a fun new software mechanism, by playing the Pop Bumpers and spinning three virtual spinning reels on the display. When three identical symbols line up, the player is awarded the prize shown on the reels. Earn Gold and spend it on needed weapons and features. An Action Button is featured on the front molding for the largest array of interactive play features ever seen in a pinball machine.

Enter a whole new realm with Game of Thrones Premium and Limited Edition Pinball models. Vastly different from the Pro model, both Premium and Limited Editions feature a massive and challenging Castle upper playfield with a second set of full size flippers, shots and an animated Dragon. Both models feature dazzling, full-playfield, color-changing LED’s throughout the game. An Elevator serving two “floors” brings the ball up to the Castle where the players battle

against Houses and Dragons. The second Elevator floor delivers the ball to the Iron Throne, where victories great and small can be celebrated. Amazing light shows and effects are a visual celebration of players’ victories.

How to Play – Game of Thrones Pinball Strategy Guide