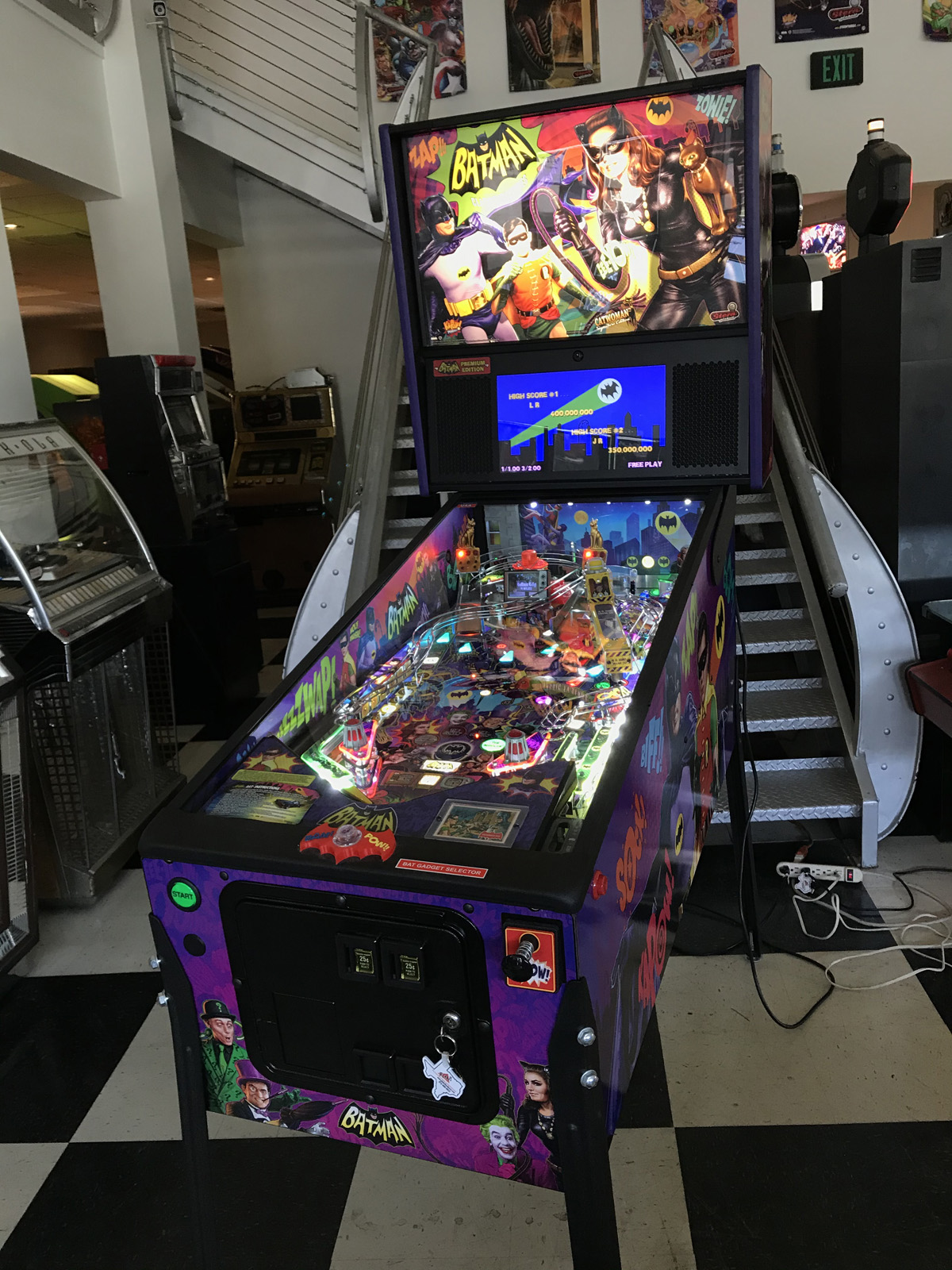 Each Batman 66′ Catwoman Signature Edition comes with an alternative translite featuring the Catwoman predominately on the backglass along with the Dynamic Duo. In addition the cabinet backbox features unique decals feature the Catwoman. In addition each Catwoman Signature Edition Pinball Machine include a vintage Topps Batman Trading Card autographed by the actress Julie Newmar who played Catwoman on the popular 60s’ TV Show. Truly a unique collectible for the ultimate Batman fan.

Stern Pinball is celebrating its 30th year in business and the 50th anniversary of the iconic American TV series with an Anniversary Edition pinball machine featuring the world famous “Dynamic Duo” of Batman and Robin. The game will immerse players in campy fun and heart-pounding action as the crime fighting Dynamic Duo comes to the aid of the Gotham City Police. Throughout the game, Batman and Robin work to deduce clues and discover super villain plots in an effort to thwart evil plans and capture bad guys. Players are guided through the game by the voices of none other than the original Batman and Robin, Adam West and Burt Ward.

A Hall of Fame pinball development team created the all new Anniversary Edition machine. The project was inspired by Joe Kaminkow of Ka-Pow Pinball and spearheaded by Stern Pinball product development chief, George Gomez, who, along with renowned programmer, Lyman Sheats, brought the game to life.

In addition to the fun title and game experience, the machine features a full color high definition display replacing the dot matrix display. In conjunction with Stern’s new SPIKE-2 electronic pinball platform, the display enables high definition graphics and innovative animations. This enables the game to feature actual TV footage from the iconic series. The game includes a second high definition display on the playfield as part of an interactive game feature

This pre-owned “home use only” pinball machine comes to us in trade from a local customer who purchased this game new and it has only been enjoyed in their home. This game has less than 200 total plays and has been well taken care of.

Catwoman has over $400 worth of custom modifications added to this game including:
– HD Playfield Glass
– Inner Cabinet Artblade Decals
– Custom Flasher Domes over the Slingshots and Crane
– Molded Building on back left corner of playfield
– Fluorescent Slingshot and Inlane Protector Plastics

Batman 66/Catwoman Signature Edition has been fully checked out by our technician team and works 100%! This pre-owned game includes our 30 day warranty.