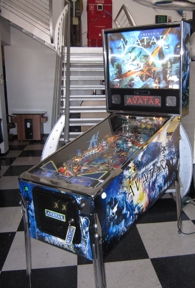 James Cameron’s Avatar Pinball by Stern Pinball transports players to the planet of Pandora on a quest to protect the Na’vi people from an invading mining colony. Based on the number one film of all-time with $2.7 billion in worldwide box office receipts and the top-selling Blu-ray release of all-time, the pinball game translates James Cameron’s history making epic into a one-of-a-kind gaming experience. Staying true to the innovative nature of the film, James Cameron’s Avatar Pinball features a 3-D backglass with incredible depth, clarity and color, speech and sound effects from the movie, and an original voiceover by Stephen Lang, who plays Colonel Miles Quaritch. This game is the Limited Edition version of this game with added game play and mechanical features.Like all fine art and collectibles, each game will be numbered, withit’s plaque and its authenticity certificate marked from number 1 of 250 to number 250 of 250.

This game has the following modifications:

Additions to Avatar contained in the Avatar Limited Edition include:
– Amp Suit with legs that march up and down, activated by solenoids
– Transporter cover that opens and closes, operated by an added motor
– A white pinball mixed among the silver balls and a sensor so that the game will increase scoring when the white ball is in play
– Shaker motor assembly
– Added game rules and computer code to operate these added devices
– More figurines decorating the game, including
– Banshee figure hovering over the plastic ramp
– Colonel Quaritch inside the Amp suit
– Navi’s mounted at the Navi target bank
– Increased number of control lamps and general illumination lamps
– Metal lower arch, enhanced with light up blue translucent windows
– Playfield support slides
– Traditional lockdown mechanism and front molding
– Playfields 1 to 25 will be signed
– Added playfield hard coat
– And of course full chrome package – side armor, lock bar, hinges, legsFreshly shopped and ready to enjoy.