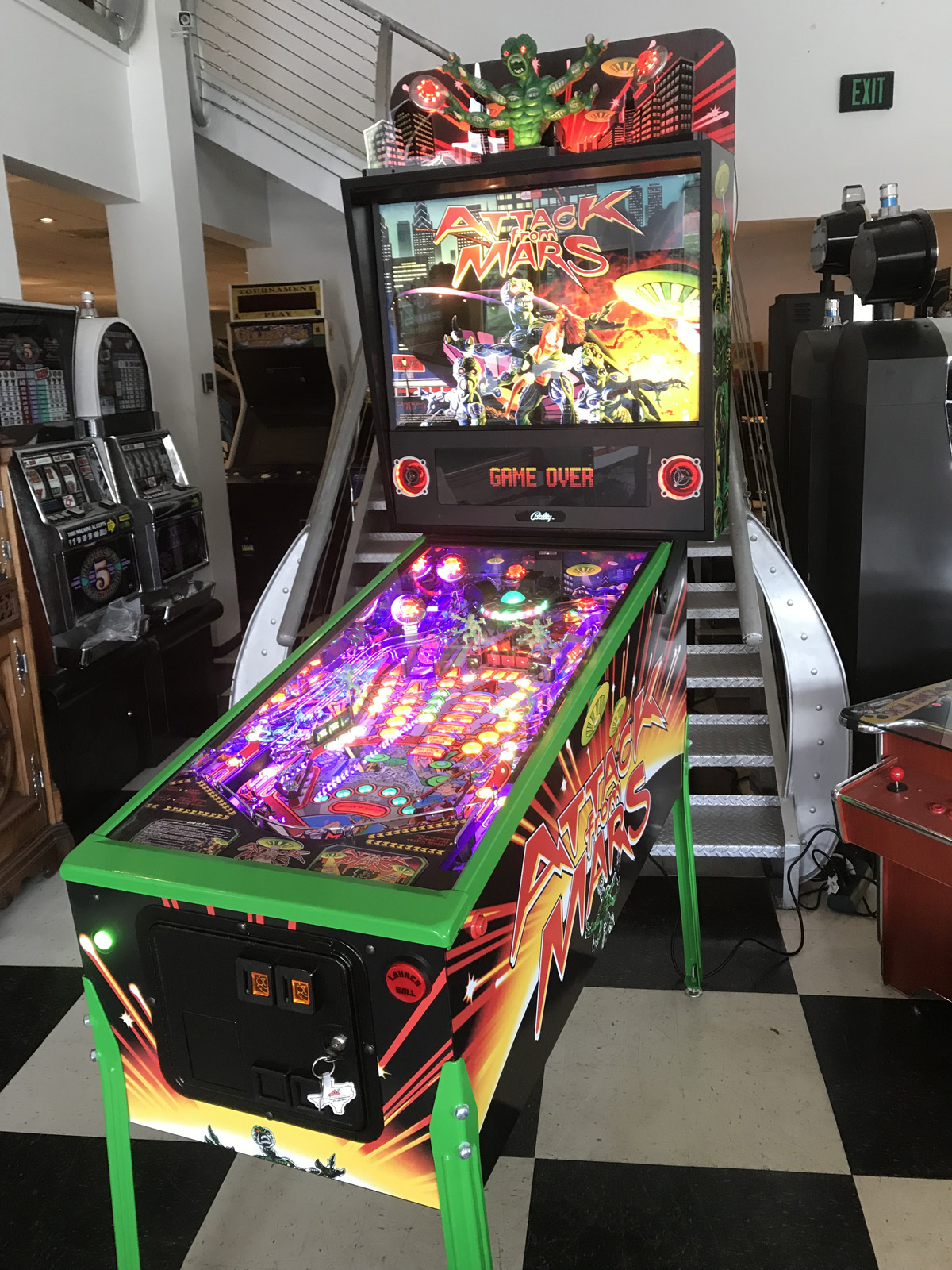 Just acquired from a local home owner is this beautiful Attack from Mars (Remake) Limited Edition. It is a one owner, home use only game with extremely low plays (less than 300 on the play meter). Meaning that it has never spent any time in a commercial location such as a restaurant or arcade and looks and plays like it’s brand new.

In addition to this game being practically brand new it has been upgraded with HD Anti-Reflective playfield glass and has Pin Stadium LED lighting across the playfield, both of these modifications are valued at over $500 and are an amazing touch to an already spectacular game.

This game still includes the remaining factory warranty from Chicago Gaming on the electronics. (as of June 2019, about 9 months remaining)

Description:
Chicago Gaming and Planetary Pinball are pleased to present Attack from Mars, the highly anticipated second game in a series of remakes of the greatest Bally and Williams pinball machines.

Recreated to exceed the high standards of the original game, Attack from Mars was available in three models: the Classic Edition, the Special Edition and the Limited Edition (Sold out). These three models all have numerous features never before available and exclusive to the remakes.
Modern electronics have been engineered to improve reliability, simplify serviceability, reduce energy consumption and provide game owners with the ability to customize their own game.

Attack from Mars features all LED lighting which means you may have to never replace a light bulb again. Painstaking efforts were made to replicate warmth and feel of incandescent bulbs. The software controls the speed at which the LEDs reach full brightness to emulate the relatively slow ramps up and down of light produced by incandescent bulbs.

The game’s cabinetry has been greatly improved. Both the cabinet and backbox are manufactured with melamine clad plywood. Melamine is 10 times more scratch resistant than traditional lacquer finishes. The original fiberboard cabinet bottom has been replaced with a ½” plywood bottom – significantly improving the strength of the cabinet and providing added protection for the cashbox.

Features of the Limited Edition Model:
– Custom Topper
Doug Watson, the creator of the original Attack from Mars art package, was commissioned to design the new topper. Watson hand sculpted the Martian from which the molds were created to produce the new roto-molded animated Martian. Watson also created the other printed topper elements.

– Enhanced Sound
Sound is a crucial component of the player’s experience. The system’s class D digital amplifier powers two 120-watt poly-cone coaxial speakers and a single 8″ 190-watt poly-cone woofer to provide an unprecedented immersive audio experience. Additionally, owners are now able to control the balance between the speaker panel and the cabinet woofer. Whether you prefer thumping bass or something more traditional, you now control your audio experience. The speakers are illuminated with red, green and blue tri-color LEDs. These are utilized to create lighting effects which have been integrated into gameplay.

– XL Display – Nearly 2x the viewable area!
In addition to the features listed above. The Limited Edition Model (limited to 1000 Units) will also include the following key features:

This game has been fully checked out by our technical team and it works and plays as it should.